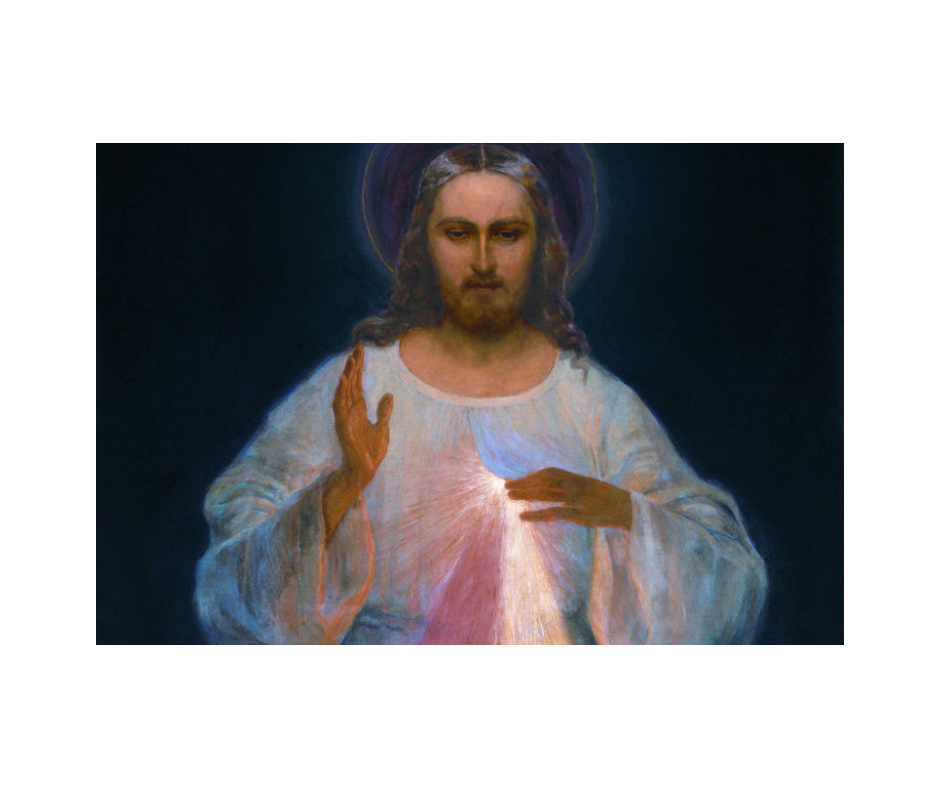 The Feast of Divine Mercy is celebrated on the Sunday following Easter. It was added to the liturgical calendar by Pope Saint John Paul II in the Jubilee Year 2000. Following quickly upon the sacrifices of Lent, the solemnity of the Triduum and the joy of Easter, many Catholics may not realize the importance of this Feast, or know the story behind it.

Helena Kowalska was born in Poland in 1905, the third of ten children. Her father was a carpenter, and her family was poor but devout. From the age of seven she felt called to the religious life, and by the age of 20 she had joined a convent, taking the name Sister Maria Faustina of the Blessed Sacrament.

“In the evening, when I was in my cell, I became aware of the Lord Jesus clothed in a white garment. One hand was raised in blessing, the other was touching the garment at the breast. From the opening of the garment at the breast there came forth two large rays, one red and the other pale. In silence I gazed intently at the Lord; my soul was overwhelmed with fear, but also with great joy. After a while Jesus said to me, ‘paint an image according to the pattern you see, with the inscription: Jesus, I trust in You.'”

Jesus explained that “the pale ray stands for the Water which makes souls righteous; the red ray stands for the Blood which is the life of souls. These two rays issued forth from the depths of my most tender Mercy at that time when my agonizing Heart was opened by a lance on the Cross.” The Lord told Faustina that he wanted the first Sunday after Easter to be the Feast of Mercy.

Over the next seven years of her life, Faustina had numerous visions of the Lord. She shared these with her confessor, Blessed Father Michael Sopocko, and she began recording them in her diary, which was published as Divine Mercy in my Soul. Faustina died, probably from tuberculosis, on October 5, 1938, less than a year before the onslaught of the Second World War.

Jesus told Faustina that “mercy is the greatest attribute of God.” On an intellectual level we may recognize this, but on a practical level it doesn’t always sink in. A mistake common to both believers and unbelievers is thinking that God is looking for reasons to keep us out of heaven. At times I’m guilty of thinking this way myself. One slight mistake, and we’re off the list. The truth is just the opposite! Yes, God sees and hears everything, and knows the very depths of our heart. Yes, God hates sin, and God is just. But he is also merciful. He is always ready to forgive.

God knows and loves us, despite all of her faults. He is the loving Father and we are the prodigal sons and daughters, and he waits anxiously for us to return to him. He gave us his only Son, Jesus Christ, to show how much he loves us.

“I saw a great light, with God the Father in the midst of it. Between this light and the earth I saw Jesus nailed to the Cross and in such a way that God, wanting to look upon the earth, had to look through Our Lord’s wounds and I understood that God blessed the earth for the sake of Jesus.”

We come to the Father through the Son. Jesus showed his apostles the way. He told Saint Faustina nothing new, but he reinforced, and added urgency to, the Gospel message when he spoke to her.

So what did Jesus tell Saint Faustina that we are to do? The answer is strikingly simple:

We must ask God for mercy. An excellent way to do so is through the Divine Mercy Chaplet that Jesus gave to Saint Faustina. It can be said using Rosary beads. The main prayer of the chaplet is the simple phrase “For the sake of his sorrowful passion, have mercy on us and on the whole world.” You can learn the entire chaplet here. It only takes about seven minutes to pray it once.

Jesus told Saint Faustina: “Say unceasingly this chaplet that I have taught you. Anyone who says it will receive great Mercy at the hour of death. Priests will recommend it to sinners as the last hope. Even the most hardened sinner, if he recites this Chaplet even once, will receive grace from my Infinite Mercy. I want the whole world to know my Infinite Mercy.

We must trust that he will show us mercy. Jesus told Faustina, “Every soul believing and trusting in my Mercy will obtain it… I want to give unimaginable graces to those who trust in My Mercy.” When you make a good confession and do the prescribed penance, you can pray to the Lord with confidence because of your trust in his Mercy.

We must show mercy to others. Jesus’ message to Saint Faustina about showing mercy to others is both challenging and reassuring. Jesus told her, “I demand from you deeds of mercy which are to arise out of love for me. You are to show mercy to your neighbors always and everywhere. You must not shrink from this or try to excuse yourself from it.” Jesus explained that we can show mercy through our actions, our words, and our prayers: “In these three degrees is obtained the fullness of my mercy.”

In the “Our Father,” as well as the parable of the unmerciful servant, Jesus explains that receiving mercy from God is conditional on our showing mercy to others. But listen to the encouraging message our Lord gave Saint Faustina: “When a soul approaches me with trust, I fill it with such an abundance of graces that it cannot contain them within itself, but radiates them to other souls.” In other words, when we place our trust in Jesus and his mercy, we will receive the grace we need to be merciful to others.

Being merciful is often not easy. Because of our sinful inclinations, it does not come naturally to us. When we have a hard time forgiving others, we can simply pray, “O my Jesus, I place all my trust in you.” The peace we receive from trusting Jesus will be the grace we need to forgive others.

Jesus suffered tremendously to open the gates of heaven for all mankind. How it must sadden him that so many souls are lost because they do not ask for his mercy, trust in his mercy, are not merciful to others! If we cannot hear the urgency of the gospel message because of its familiarity, let the words the Lord spoke to Saint Faustina be present reminders of his great love for us and the great mercy he desires to bestow on us.

The merciful Savior is waiting for you. Today is the day to turn to him in prayer, and place all your trust in his Mercy.

For further reading: In addition to the Divine Mercy Chaplet, the Lord suggested several other devotional practices to Saint Faustina:

Can you spare seven minutes to help a dying soul?