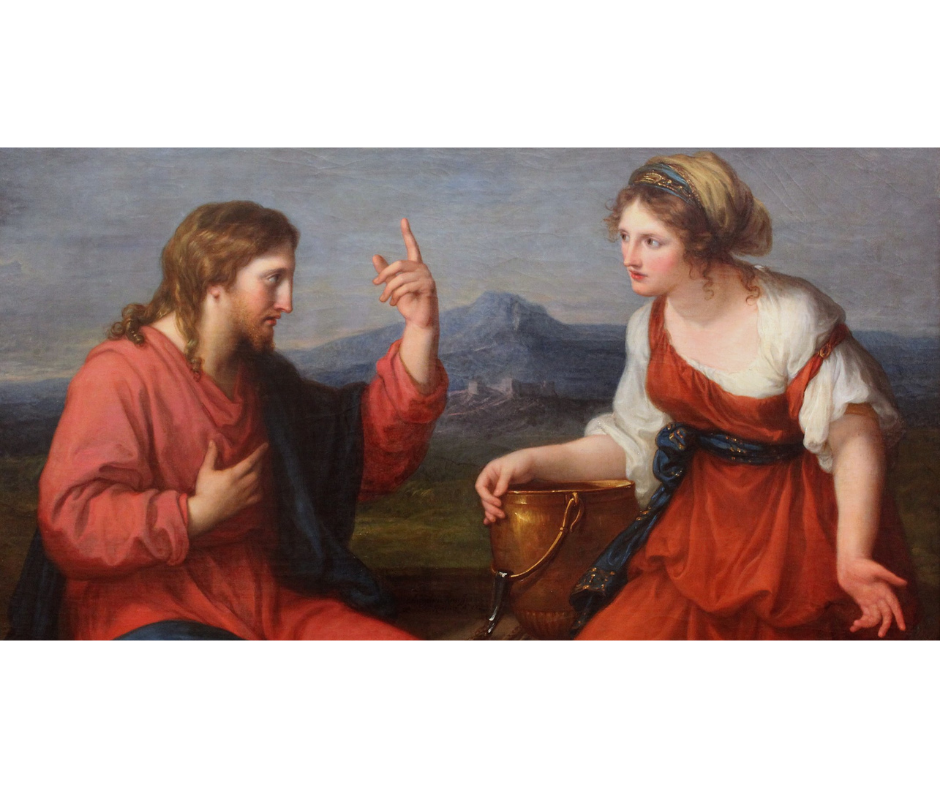 Pope Francis, at the beginning of his first exhortation to the world, invited “all Christians, everywhere, at this very moment, to a renewed personal encounter with Jesus Christ, or at least an openness to letting Him encounter them; I ask all of you to do this unfailingly each day. No one should think that this invitation is not meant for him or her, since ‘no one is excluded from the joy brought by the Lord.’ The Lord does not disappoint those who take this risk; whenever we take a step towards Jesus, we come to realize that He is already there, waiting for us with open arms.” (1)

What does an encounter with Jesus entail? While no two encounters are the same, the encounter between Jesus and the Samaritan woman at the well in John’s gospel (chapter 4 – you can read it here) is illuminating. It is the longest passage recorded in the gospels of back-and-forth dialogue between Jesus and another person.

We all can relate to feeling like an outcast at times. And, prior to our encounter with Jesus, we are outcasts in a more basic sense, that we have estranged ourselves from God by our sins.

It is Jesus who initiates the conversation, asking the Samaritan woman to “give Him a drink.” Every encounter with Jesus is initiated by Jesus. We may not be aware of it, but He longs for us (in fact, thirsts is a better way to put it), and He invites every one of us to come to Him, so that His thirst may be satisfied, and so that He can give us the waters of everlasting life.

The woman points out that Jesus shouldn’t even be talking to her, since He is a Jewish man and she is a Samaritan woman. Their dialogue breaks multiple social conventions! But that doesn’t stop Jesus. Likewise, the chasm between the Son of God and us poor sinners is unfathomably deep. We can be overawed by Jesus, or worry that He’ll never forgive us, or find other reasons to turn away from Him. But those objections don’t concern Him. He reaches out to us still.

Jesus knows everything about the Samaritan woman, but she only comes to recognize Him gradually. When Jesus first offers her “living water,” she responds skeptically. It is only when she begins to grasp what Jesus is offering that she accepts His invitation: “Sir, give me this water.”

It is also only after she accepts His invitation that Jesus brings up her sins: “Go call your husband.” Note that Jesus does not condemn her for anything. He merely speaks the truth. But the truth of our lives isn’t always pretty. Jesus knows when we’ve followed Him and when we’ve betrayed Him. He’s seen us at our best and our worst. He brings up these things so that we can see ourselves as we are and respond to Him in love through penance and conversion.

The evangelists do not often record Jesus’ tone or emotion. I imagine Him bringing this up very gently to the woman.

The woman does not withdraw in fear or shame when Jesus brings up her sins. Through this incident she grows closer to the truth of who He is, saying “Sir, I can see that you are a prophet.”

She is also growing closer to the truth of who she is, and who she can be.

Jesus continues to speak the truth to the Samaritan woman, only now He is not confronting her with her sins, but inspiring her by proclaiming that the Kingdom has arrived: “The hour is coming, and is now here, when true worshipers will worship the Father in Spirit and truth; and indeed the Father seeks such people to worship Him.” The dialogue concludes with Jesus revealing Himself to her: He is the Messiah.

The woman is so moved by her encounter with Jesus that she cannot keep it to herself. She tells everyone in the town abut Jesus; they in turn go out to meet Jesus and invite Him to stay with them. They too come to believe: “we have heard for ourselves, and we know that He is truly the savior of the world.”

A genuine encounter should set our hearts on fire, just as His Sacred Heart is burning with love for us. We should feel compelled to share His love with others. “Neither do people light a lamp and put it under a bowl. Instead they put it on its stand, and it gives light to everyone in the house.” (Matthew 5:15)

This article, while explaining that the Catholic Church does encourage us to have a personal relationship, also reminds that our relationship with Jesus needs to be grounded in Scripture and Tradition. We must guard against making Jesus who we want Him to be, rather than who He is.