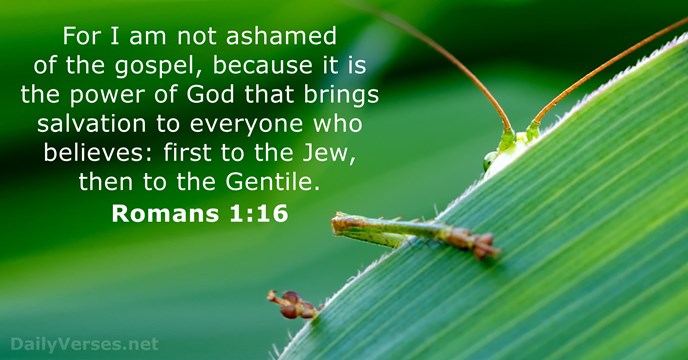 Paul’s letter to the Christian community in Rome is the first of his epistles in the New Testament canon, as well as the longest. Paul wrote the letter between 55-58 AD, most likely while staying in Corinth. (1) It is the fullest expression of his belief that while all have sinned, salvation is available to everyone through faith in the Lord Jesus Christ. It is a powerful letter that be can be misinterpreted if verses are taken out of context, or if it is read apart from the gospels and the teachings of the Church.

After greeting his audience, Paul expounds a thesis he aims to prove in his letter:

For I am not ashamed of the gospel. It is the power of God for the salvation of everyone who believes: for Jew first, and then Greek. For in it is revealed the righteousness of God from faith to faith; as it is written, “The one who is righteous by faith will live.” (Romans 1:16-17)

Before delving further into our salvation, Paul necessarily discusses our proclivity to sin. Note that Paul finds all humanity guilty, for while God revealed Himself in a special way to the Jewish people, He also reveals Himself to all humanity through the splendor and majesty of His creation:

The wrath of God is indeed being revealed from heaven against every impiety and wickedness of those who suppress the truth by their wickedness. For what can be known about God is evident to them, because God made it evident to them. Ever since the creation of the world, his invisible attributes of eternal power and divinity have been able to be understood and perceived in what he has made. As a result, they have no excuse; for although they knew God they did not accord him glory as God or give him thanks. Instead, they became vain in their reasoning, and their senseless minds were darkened. (Romans 1:18-21)

Paul is making a big claim here. While God revealed Himself in a particular way to the people of Israel, and fully through His Son Jesus, people of all times and places should arrive at a belief in God through His vast, awe-inspiring, infinitely complex and delicately balanced creation. Modern science gives us an even greater understanding of how finely calibrated the universe is, providing strong evidence of a Creator. But even in ancient times, a thinking person should have understood that the universe has a perfectly good and all-powerful Creator. Both Plato and Aristotle arrived at this conclusion.

Paul then says that, since all should believe in God, all should give Him thanks and glory, and by implication, not rebel against Him through sin. (2) But instead, the hearts of people turned away from God, and sin abounds in the world:

While claiming to be wise, they became fools and exchanged the glory of the immortal God for the likeness of an image of mortal man or of birds or of four-legged animals or of snakes.

Therefore, God handed them over to impurity through the lusts of their hearts for the mutual degradation of their bodies. They exchanged the truth of God for a lie and revered and worshiped the creature rather than the creator, who is blessed forever. Amen.

Therefore, God handed them over to degrading passions. Their females exchanged natural relations for unnatural, and the males likewise gave up natural relations with females and burned with lust for one another. Males did shameful things with males and thus received in their own persons the due penalty for their perversity.

And since they did not see fit to acknowledge God, God handed them over to their undiscerning mind to do what is improper. They are filled with every form of wickedness, evil, greed, and malice; full of envy, murder, rivalry, treachery, and spite. They are gossips and scandalmongers and they hate God. They are insolent, haughty, boastful, ingenious in their wickedness, and rebellious toward their parents. They are senseless, faithless, heartless, ruthless. Although they know the just decree of God that all who practice such things deserve death, they not only do them but give approval to those who practice them. (Romans 1:22-32)

Paul catalogs nearly every kind of sin here. While idolatry of graven images is rare these days, there are many forms of idolatry that are flourishing. “Degrading passions” includes all sexual relationships outside of marriage. Envious, greedy, spiteful, gossiping, boastful – there is something here that touches everyone, and the appropriate response is to recognize our faults and turn to God seeking repentance.

Conversely, the wrong response, Paul tells us, is to judge others for their sins.

Therefore, you are without excuse, every one of you who passes judgment. For by the standard by which you judge another you condemn yourself, since you, the judge, do the very same things. We know that the judgment of God on those who do such things is true. Do you suppose, then, you who judge those who engage in such things and yet do them yourself, that you will escape the judgment of God? Or do you hold his priceless kindness, forbearance, and patience in low esteem, unaware that the kindness of God would lead you to repentance? By your stubbornness and impenitent heart, you are storing up wrath for yourself for the day of wrath and revelation of the just judgment of God, who will repay everyone according to his works: eternal life to those who seek glory, honor, and immortality through perseverance in good works, but wrath and fury to those who selfishly disobey the truth and obey wickedness. (Romans 2:1-8)

Paul dedicated his whole life to sharing the Good News and leading others to Christ. He did not mince words about sin, but he always remembered that his own sins were great. He stood and watched as Stephen was stoned to death, and he dragged other Christians to prison before his encounter with the Lord on the road to Damascus. He shared the Good News knowing that Jesus had saved Him from eternal death and sharing in the Lord’s fervent desire to save others. We are called to share the Gospel in the same manner.

(1) Scholars are virtually unanimous that Saint Paul is the author of the letter to the Romans.

(2) The Catechism, citing chapter 1 of Paul’s letter to the Romans, states that “‘ignorance of God’ is the principle and explanation of all moral deviations” (CCC, 2087).