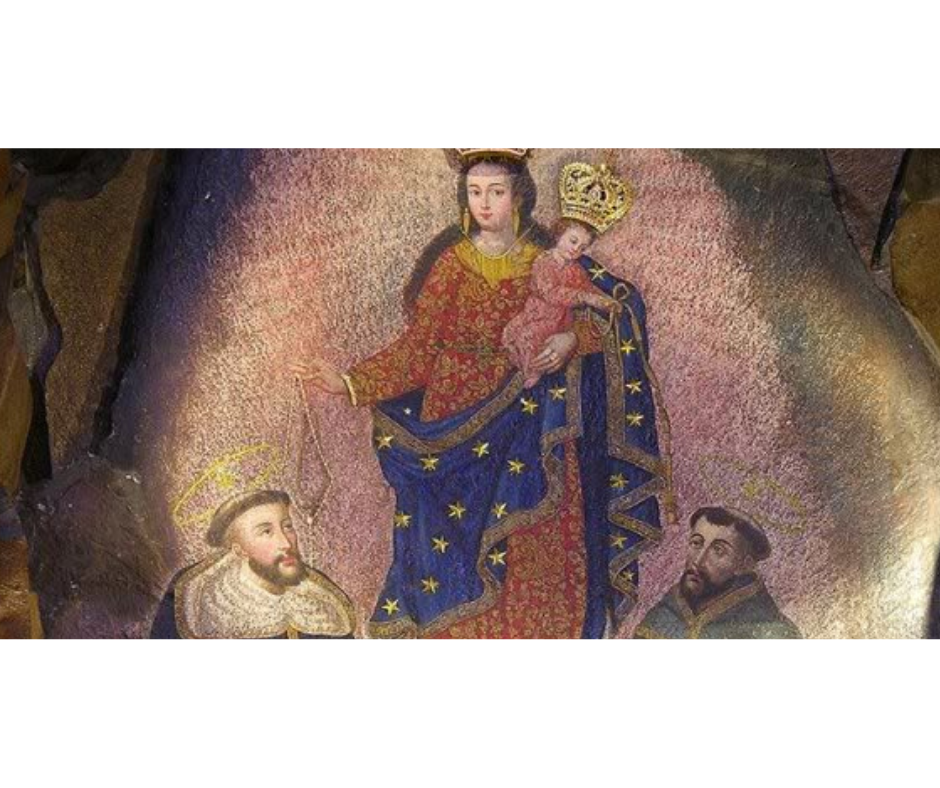 Our Lady of Guadalupe is one of the best-known apparitions of Mary. A similar but less famous apparition took place in Guaitara Canyon, Colombia in 1754. As she did two centuries before in Mexico, Our Lady of Las Lajas (Our Lady of the Rocks) left behind evidence of her appearance that continues to defy scientific explanation. Here’s the story:

A woman named Maria Mueses de Quinones was walking home with her young daughter, Rosa, who was deaf and mute. Maria and Rosa stopped to rest by the rocky cliffs of a canyon. In the cliffs, Rosa turned to her mother and said, ““Mommy, look at the mestiza who has detached herself from the rock with a little boy in her arms and two little mestizos at her side!” Maria saw nothing. She was shocked that Rosa was talking to her. When the storm passed, the two walked home.

A few days later, Rosa went missing. Maria looked everywhere for her. Then she realized she may have gone back to the grotto. When Maria went there, this time she saw the beautiful woman, who was watching over Rosa and another little child. Maria knew that the woman was Mary, and the child playing with her daughter was the Child Jesus.

Neither Maria nor Rosa told anyone what they had seen.

A few months later, Rosa suddenly fell ill and died. Maria carried her deceased daughter to the grotto, and begged for Mary to intervene and bring her daughter back to life. And that is just what happened. Rosa was restored to life.

When Maria returned to town with Rosa, she explained to her incredulous neighbors everything that had happened at the grotto. Together they all went back to the grotto, where they were greeted by a miraculous sight.

An image of Mary holding the Child Jesus appeared painted on the rocks of the grotto. Next to them are Saints Dominic and Francis. Mary is handing Saint Dominic a Rosary, and Jesus is handing Saint Francis a friar’s cord.

The image on the rock above can still be seen today at the Shrine of Our Lady of Las Lajas in Ipiales, Colombia. Here is where things get really interesting. Scientists have studied the rock and found that the image is not painted on the rock at all. Rather, the color of the rock itself was changed to produce the image. The new colors on the rock go several feet deep. (1)

Much like the tilma of Juan Diego, there is no natural explanation for this image, known as Our Lady of Las Lajas.

The Church authorized devotion to Our Lady of Las Lajas in 1951.

Our Lady of Las Lajas, pray for us!

(1) The crowns on Mary and Jesus’ were painted on by someone after the image first appeared.

I first learned about Our Lady of Las Lajas from Father Donald Calloway’s very interesting book Champions of the Rosary: The History and Heroes of a Spiritual Weapon. For further reading on Our Lady of Las Lajas, see these articles at catholicexchange.com (written by Father Calloway), roman-catholic-saints.com, churchpop.com, americaneedsfatima.com, miraclehunter.com, and catholicculture.com.