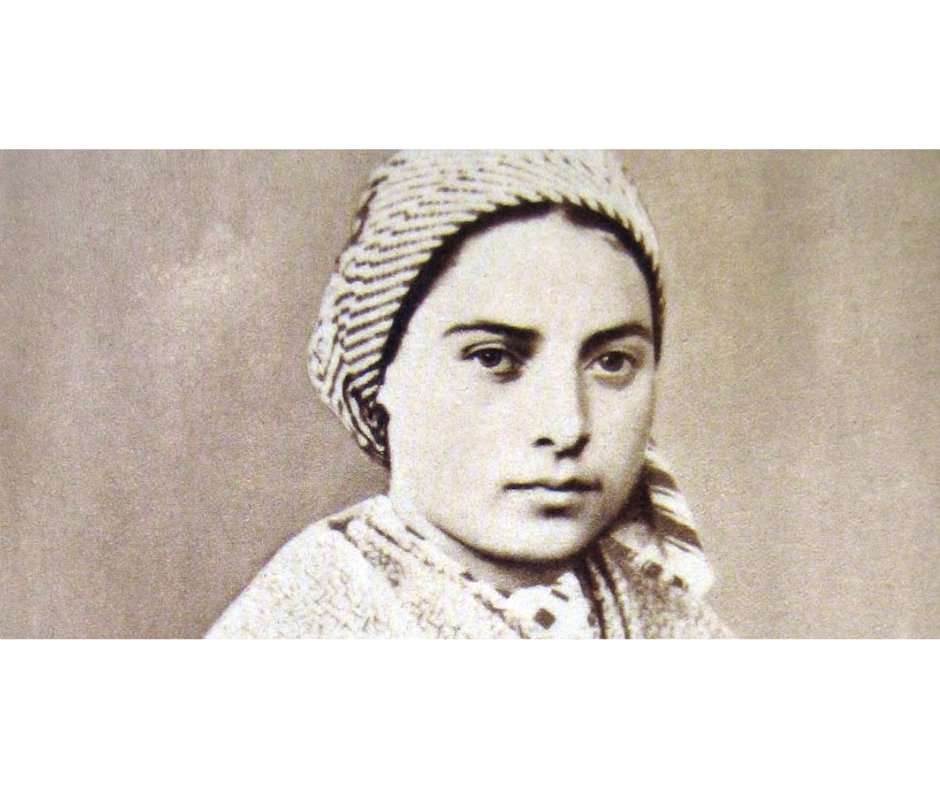 The three most famous Marian apparitions are at Guadalupe, Lourdes and Fatima. These three are famous in large measure due to the miracles associated with them. The miracle of Guadalupe is the most enduring – the tilma with the image of Our Lady of Guadalupe has survived, inexplicably, for nearly five centuries. The Miracle of the Sun is the most spectacular. Lourdes surpasses them in quantity, for there are seventy miracles springing from Lourdes that are authenticated by the Church.

Our Lady appeared to Bernadette Soubrious eighteen times between February 11, 1858 and July 16, 1858. Bernadette was fourteen years old at the time of the apparitions. She was a sickly child, suffering from severe asthma, and her family was poor, renting a one-room basement apartment. She was gathering firewood on February 11th near a grotto when she heard a gust of wind, and “saw a lady dressed in white, she wore a white dress, and equally white veils, a blue belt and a yellow rose on each foot.” Bernadette said the Rosary, while the Lady followed along on her Rosary beads.

As at Fatima, word of the apparitions spread, and crowds began to gather at the grotto with Bernadette, yet Bernadette was the only one to see or hear the Lady. The Lady first spoke to Bernadette on February 18th, telling Bernadette that she would not make her happy in this life, but in the next. On February 24th, the Lady asked Bernadette for “Penance! Penance! Penance! Pray to God for sinners. Kiss the ground as an act of penance for sinners!” On February 25th, at the Lady’s request, Bernadette dug in the ground and drank muddy water from a spring. The next day, the water from the spring was clear. On March 2, the Lady asked that a chapel be built at the site, for people to come to the site in procession.

The parish priest, skeptical of the authenticity of the visions, insisted that the Lady needed to tell Bernadette her name. On March 25th (note the date), the Lady told Bernadette, “I am the Immaculate Conception.” Bernadette could not read or write, and had never heard the phrase “Immaculate Conception” before. She repeated it all the way as she ran to the parish priest, who did know what it meant, and now trusted that the Virgin Mary was truly appearing to Bernadette. (1)

Mary appeared to Bernadette for the final time on July 16th. Bernadette said Mary at this final appearance was more beautiful than ever.

Two years later, Bernadette joined the Sisters of Nevers. She would spend the remaining nineteen years of her life caring for the sick. She lived in intentional obscurity, likening herself to a broom the Virgin Mary used to sweep the floor, and then put away when the work was done. She wrote to the pope that her “weapons were prayer and sacrifice.”

Ever since Mary appeared at Lourdes, thousands of miracles have been reported by pilgrims who put their faith in God and visited the grotto. In 1883 doctors began to investigate the veracity of the Lourdes miracles, and in 1905 Pope Pius XII instituted the Lourdes Medical Bureau to officially investigate the claims. To date, the Medical Bureau has verified seventy officially recognized miracles. This is not to say that many more miracles have not occurred, but only these seventy have been authenticated by the Church, according to very rigorous criteria. The healing must be complete, spontaneous, immediate, and without any subsequent relapse. The illness must have been incurable, and there must not be any medical treatment that could potentially have caused the cure. The Medical Bureau’s investigations are public records open to anyone to review.

One of the most famous Lourdes miracles occurred in 1902. A young woman name Marie Bailly and a doctor named Alexis Carrel were traveling by train to Lourdes. Bailly was suffering from “acute tuberculous peritonitis and considerable abdominal distension with large hard masses.” Bailly traveled to Lourdes seeking a miracle. Carrel, though raised Catholic and Jesuit educated, was an agnostic. He wanted to discover if there were natural causes leading to the healings at Lourdes.

Carrel treated the half-conscious Bailly on the train, and didn’t expect her to survive the trip. She did, and was taken to Lourdes. She was too ill to be submerged in the waters, but at her request three pitchers of water from the grotto were poured over her abdomen. The first caused her intense pain. With the second the pain lessened, and the third gave her a pleasing sensation.

Carrel described what happened next: “The enormously distended and very hard abdomen began to flatten and within 30 minutes it had completely disappeared. No discharge whatsoever was observed from the body.”

Per Carrel’s request, the now healthy Bailly was monitored by a physician and a psychiatrist for the next four months. Bailly joined the Sisters of Charity, and cared for the sick and the poor until her death in 1937.

Carrel won the Nobel Prize in 1912 for his work in vascular anastomosis. As Marie Bailly’s healing became famous, he publicly admitted that he could find no natural explanation for her cure (ending his career at the University of Lyons). Still, he was not an instant convert to the faith. In 1938 (one year after Marie Bailly’s death), Carrel sought out a Trappist monk, Father Alexia Presse. Their dialogue over the ensuing years finally led to Carrel’s conversion. He died in Paris in 1944, after receiving the Last Rites of the Church from Father Presse.

The most recent certified miracle at Lourdes, the healing of Sister Bernadette Moriau from spinal complications that had left her wheelchair bound for nearly three decades, occurred in 2008, and was declared a miracle by the Lourdes Medical Bureau in 2018.

Our Lady of Lourdes, pray for us!

(1) Pope Pius IX declared belief in Mary’s Immaculate Conception to be a dogma of the Church in 1854, a mere four years before Our Lady appeared to Bernadette at Lourdes.